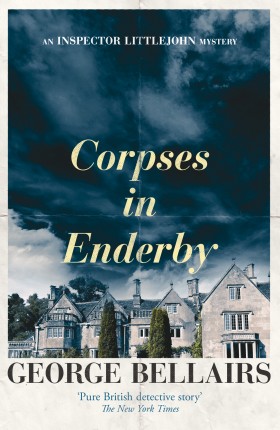 We'd like to give you a book, for free.

Discover the world of Inspector Littlejohn in Corpses In Enderby, a George Bellairs classic.

You just need to tell us where to send it.

“Since Dorothy L Sayers abandoned Lord Peter Wimsey, we should class Mr Bellairs as our most ‘literary’ practitioner in the field of detection”

George Bellairs was the pseudonym of Harold Blundell (1902-1982).  He was, by day, a Manchester bank manager with close connections to the University of Manchester.  He is often referred to as the English Simenon, as his detective stories combine wicked crimes and classic police procedurals, set in small British communities.

He was born in Lancashire and married Gladys Mabel Roberts in 1930. He was a Francophile which explains why many of his titles took place in France.  Bellairs travelled there many times, and often wrote articles for English newspapers and magazines, with news and views from France.

He was a noted philanthropist and was prominent in Manchester’s public life as a member of the United Manchester Hospitals Board and Chairman of the Private Patients Home. He was granted an honorary masters degree by the University of Manchester in 1959 in recognition of his charitable as well as his literary work. After retiring from business, he moved with Gladys to Colby on the Isle of Man, where they had many friends and family. Some of his detective novels are set on the Isle of Man and his surviving notebooks attest to a keen interest in the history, geography and folklore of the island. In 1941 he wrote his first mystery story during spare moments at his air raid warden’s post, and ten years later he wrote a comedy for the radio entitled The Legacy, which was broadcast on 12 December 1951. Throughout the 1950s he contributed a regular column to the Manchester Guardian under the pseudonym George Bellairs, and worked as a freelance writer for other newspapers both local and national.

Blundell’s first mystery, Littlejohn on Leave (1941) introduced his series detective, Detective Inspector Thomas Littlejohn.  His books are strong in characters and small communities – set in the 1940s to ‘70s.  The books have strong plots, and are full of scandal and intrigue.  His series character started as Inspector and later became Superintendent Thomas Littlejohn.  Littlejohn, reminiscent of Inspector Maigret, is injected with humour, intelligence and compassion.

Bellairs, unlike the reputation of a bank manager would perhaps imply, was amusing and gave many a talk on ‘how to commit a murder in books’ alluding that the audience may have expected a boring old banking lecture.

“Bellairs works in a comic tradition that extends from Ben Jonson… Each character has a particular trait exaggerated to the point of obsession or caricature.” — Susan B. MacDougall

Despite early success in Britain and the United States, Bellairs’ novels became less popular and, though he was a prolific writer over several decades, he has faded from the public eye.  However, many of his early books are extremely rare and highly sought by collectors.

He died on the Isle of Man in April 1982 just before his eightieth birthday after a protracted illness.

To get your free book, just tell us where to send it